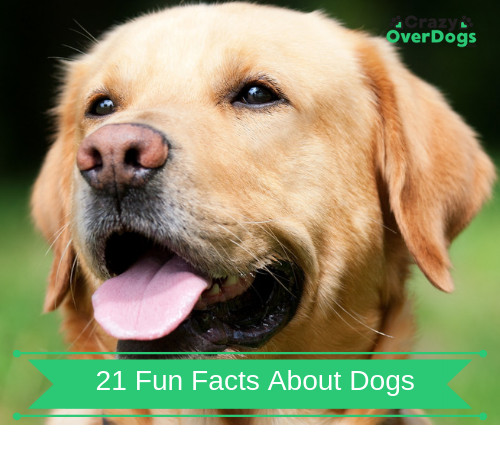 We hope that these 21 fun facts about dogs will brighten your day. Please enjoy:

Also, make sure to check out today’s deals to SAVE money on dog products by clicking on the graphic below.

Fact 1: The dog which has lived the longest according to the Guinness Book of Records was called Bluey. He lived to the ripe old age of 29 and was a cattle dog in Australia

Fact 2: What most pet owners already know.  Over 90% of pet owners say their pet makes them smile more than once a day.

Fact 5:  Again according to the Guinness Book of World Records, the smallest dog on record was a Yorkshire terrier and weighed just four ounces.

Fact 6:  Dogs can detect various health issues in humans, such as diabetes or cancer. A clinical study from Germany demonstrated that dogs were able to smell and detect compounds within the human body, which indicated it wasn’t working correctly

Fact 7:  When a dog is licking, it is demonstrating to that person or dog that it is being submissive because it recognizes they are more dominant.

Fact 8:  The highest population of dogs in the world is found in the United States.  Amazingly, over 60% of U.S. households own a pet, which equates to over 70 million homes.

Fact 9:  In the United States, around one million dogs, have been named as the primary beneficiaries in their owner’s will.

Important Note: Please ensure that your pet is taken care of, in the unfortunate event of your death. So many pets are abandoned and it is so tragic. Be responsible, because they are part of your family. Thank you.

Fact 11:  Dogs can only sweat through the pads of their feet.

Fact 12: A poll from an animal hospital in the United States,  found that around thirty-three percent of dog owners admit to talking to their dogs on the phone whilst they are away. Not ashamed to admit that I have done this too.

Fact 14:  Around seventy percent of people sign their pet’s name on holiday or greeting cards. Guilty as charged.

Fact 15:  I think this is an amazing fact. Kubla Khan owned 5,000 Mastiffs,  which were the most dogs owned by anyone to date. He founded the Yuan dynasty in China in the year 1271.

Fact 16:  I always wondered why my dog does this.  According to experts, when a dog sits on someone’s feet, it is their way of staking their claim over them. Now I know.

Fact 17:   When dogs roll around in the dirt, or something worse, it is to mask their own smell. It’s instinct with them because, in the wild, it was useful when they were hunting prey. Also, they were trying to avoid being hunted themselves.

Fact 19:  I always knew that dogs had a great hearing when they are young, but this fact proves it. They can locate a sound source in six hundreds of a second.  Dogs hear best at 8,000 Hz.

Fact 21:  Nearly  60 percent of dog owners put pets in family and holiday portraits. Why not, because they are part of your family.

>>> Please Check Out Our Buying Guides For Dog Products<<<

This presentation contains images that were used under a Creative Commons License. Click here to see the full list of images and attributions: