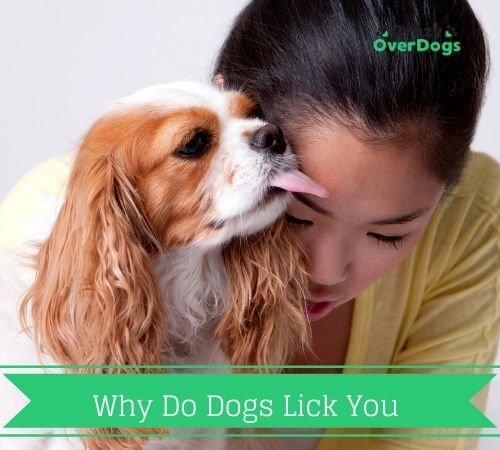 Why do dogs lick you so much in the morning? ( Infographic Included ). If you have a dog or know someone who has a dog, you know that their constant licking can sometimes be annoying.

Dogs are so cute and most of the time their way of showing affection to humans is to lick their faces. It’s great to pet your pets, but sometimes we don’t want them licking our faces.

The content takes around 4 minutes to read, but if you are in a hurry, we have also included a table of contents and an infographic below so you can see at a glance what the content is.

Also, make sure to check out today’s deals to SAVE money on dog products by clicking on the graphic below. This post contains affiliate links and I will be compensated if you make a purchase after clicking on my links.

Why Do Dogs Lick You Infographic:

Why Dogs Lick and What It Means for You

There are many different reasons why dogs lick us. It may be to say hello, to show affection, or to get something edible off of our skin. The licking behavior in dogs can also be seen in other mammals like primates and even cats.”

Although dog licking may be a pleasant sensation for humans, licking is a natural behavior that has benefits for the dog.

Dogs lick their fur to clean themselves and to get rid of dead hair.

They also lick their fur when they have a hairball. Dogs use their tongue to move the hair in a circular motion against the fur which helps get rid of loose hair and dirt.

The licking helps dogs identify each other by smell.

Scientific research suggests that dogs can identify each other by smell and that saliva contains pheromones that allow for this recognition.

Dog licking may be a way for them to show affection or bond with their owners, an instinctive behavior called “allogrooming.”

Dogs lick for a variety of reasons. Some dogs lick to show their affection or to form a bond with their owners. Dogs also lick as a way to clean themselves and other animals, as well as a way to communicate their presence.

It is an instinctive behavior called allogrooming that helps lower stress hormones and creates a sense of bonding between the dog and the person being licked.

Licking can also be used as a form of communication between dogs.

Licking is a dog’s way of communicating its intentions with another animal. When a dog licks a person, they are displaying a sign of affection and trying to establish itself as an alpha or higher rank in the social hierarchy.

5). Dogs lick wounds on themselves and other dogs as part of their grooming process, which helps keep wounds clean and heal faster than not licking the wound at all.

Dogs lick their wounds to keep them clean and heal faster. This is because saliva contains many healing agents such as antibodies, urea, antimicrobial enzymes, and lysozyme.

Licking is both an instinctual behavior and a learned one. The licking reflex in animals is often used as a sign of submission or appeasement. However, it is not just limited to this purpose.

The dog’s saliva contains an enzyme that breaks down proteins, which can help remove germs from your skin.

How to Stop a Dog from Licking- Tips and Tricks

It is natural for a dog to lick. And if they do, you can’t stop them and it is not something that you should punish them for. Dogs have been licking people for centuries now so it’s not going to change now anytime soon.

In this article, we will be exploring how to stop your dog from licking you using the following tips:

Replace the attention dogs get from licking with another behavior

Dogs lick because they are feeling anxious or nervous. By teaching them to use a different behavior, dogs can be more comfortable in social situations.

Find out what triggers the licking by the dog

Licking can be a form of communication. Dogs will lick people or other dogs to show affection, make a request, or explore something new.

Reward other behavior that you want your dog to do instead

Dogs are naturally inclined to chase and catch things, which is why it is important to reward cooperative behavior. You can do this by playing a game that requires a dog to sit and stay still. This teaches your dog that staying still is a good thing.

What does it mean when a dog licks a human?

A dog licking a human is usually an act of affection. Dogs have evolved to use their sense of smell to interpret emotions and act accordingly. They lick humans to identify us as part of their pack, meaning the dog believes the human is a dog too. It also signifies trust because dogs can get very infected with bacteria if they lick something they shouldn’t so an act like this shows that the dog trusts you

Why does my dog lick my face with his tongue?

Licking is an act that can be either playful or submissive. Dogs lick their masters (or owners) as a sign of affection, they also lick tasty treats to find out what they are.

Why does my dog lick other dogs’ urine?

Some people might find it gross, but there are many reasons why dogs lick other animals’ urine. Most often, this is a sign that the dog is marking their territory. Dogs also lick the urine of other animals to learn about new animals in their environment.

Is it bad if your dog licks you?

The short answer is yes, but the long answer is not so simple. For instance, if you have a cold and your dog licks your face, it can transfer the virus and make you sick. It’s also possible for bacteria to be transferred via licking and lead to infection or gastrointestinal disease. On the other hand, it’s possible that licking could be beneficial in terms of reducing stress levels and improving your overall health.

Are dog licks really kisses for you?

Dogs lick their owners to show affection. It’s a way of showing that they care and want you to know that they love you. Dogs also lick because it is a natural response to certain situations, such as when they’re stressed, scared, or worried about something going on in their environment.

In conclusion, dogs lick us for a variety of reasons, some of which are more benign than others. It has been well-established that there are many benefits of dogs licking humans. It has been found to be effective in the treatment of depression, as well as a general stress reliever.

Getting licked by a dog is beneficial for your mental health and wellbeing. And it’s no secret that we all crave attention and love from others!

We do hope that the information above has answered the question, why do dogs lick us when we pet them?

Disclaimer: All material on this website is provided for your information only. It may not be construed as medical advice. No action or inaction should be taken based solely on the contents of this information. Instead, readers should consult appropriate health professionals or veterinarians on any matter relating to their pet’s health and well-being. The publisher is not responsible for errors or omissions.