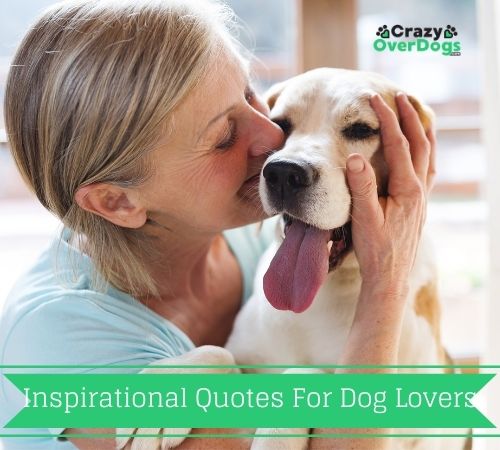 Most of us would find it hard, to sum up how we feel about our beloved dogs, including me. However, I have found that various famous and inspirational dog quotes can do this beautifully, better than I could ever do.

So please discover below 27 of the most heart-warming and inspiring dog quotes. I do hope that you enjoy them and that they will inspire you, bring a smile to your face, and remind you how lucky you are to own a dog.

Make sure to check out today’s deals to SAVE money on dog products by clicking on the graphic below. Also, click here to visit our special offers page for ongoing offers for more savings on dog products. Don’t miss out.

This post contains affiliate links and I will be compensated if you make a purchase after clicking on my links.

In addition, don’t forget the great health benefits that they bring into our lives.

1).  Until one has loved an animal, a part of one’s soul remains unawakened…………….. Anatole France

Anatole France: He was a successful French novelist, journalist, and poet who had several bestsellers to his name. He was born in Paris.

2).  No matter how little money and how few possessions you own, having a dog makes you feel rich…….. Louis Sabin

Louis Sabin: He is an author and editor who was born in Salt Lake City, Utah. He was educated at New York University, where he obtained his Master of Arts, degree. He is the author of over 160 books, which included “Wilbur and Orville Wright ” and ” Wonders of the Sea “. In addition, he has contributed to many professional journals.

3). I think dogs are the most amazing creatures; they give unconditional love. For me, they are the role model for being alive. ……….Gilda Radner

Gilda Radner:  She was an American comedian and actress, who was born in Detroit, Michigan. She was one of the original cast members for the NBC sketch comedy show Saturday Night Live, for which she won an Emmy Award.

4).  Dogs are not our whole life, but they make our lives whole…… Roger Caras

Roger Caras: He was an American writer, wildlife photographer, and wildlife preservationist, who was born in Methuen, Massachusetts. He was featured on Nightline and ABC World News. He went on to become the president of the American Society for the Prevention of Cruelty to Animals.

J.R. Ackerley: He was a British writer and editor, who was born in London,   England.  He started at the BBC, (British Broadcasting Corporation ), the year after it was founded in 1927. He was promoted to literary editor of The Listener, its weekly magazine, a post he held for over 20 years.

6).  Saving one dog will not change the world, but surely for that one dog, the world will change forever…………… Karen Davison

Karen Davison: She is a former British wheelchair athlete, competing successfully in the 1980s in the London Marathon women’s wheelchair race. In the 1984 Summer Paralympics, she won gold, silver, and bronze medals in various disciplines.

7). Dogs have a way of finding the people who need them, and filling an emptiness we didn’t know we had……….Thom Jones

Thom Jones:  He was an American writer, who was born in Aurora, Illinois. He studied at the University of Iowa and the Iowa Writers’ Workshop. He specialized in writing short stories and was discovered by the magazine “The New Yorker”.

8). Everyone thinks they have the best dog. And none of them are wrong…… W.R. Purche

9).  It is rewarding beyond words to rescue a dog from the shelter and have that dog become part of your family………. Jenna Morasca

Jenna Morasca: She is an American actress, who was born in Pittsburgh, Pennsylvania. She is best known for being a contestant on the American reality TV show, ” Survivor: The Amazon “, where she won the grand prize of one million dollars.

10).   A dog is the only thing on earth that loves you more than you love yourself. …….Josh Billings

Josh Billings: – American humorist and lecturer. After a roving life as a farmer, explorer, and coal miner, he settled in New York, as an auctioneer and real estate dealer. In 1860 he began to write humorous sketches and homespun philosophies in rural dialects and soon became a popular lecturer.

11).  It is amazing how much love and laughter they bring into our lives and even how much closer we become with each other because of them……….John Grogan

12).  A dog can snap you out of any kind of bad mood that you’re in faster than you can think of….. Jill Abramson

Jill Abramson:  She is an American journalist and author, who was born in New York City. She is best known as the first female executive editor of The New York Times. She was also listed on Forbes list of most powerful women.

13).  Opening up your life to a dog who needs a home is one of the most fulfilling things you can do………… Emma Kenny

Emma Kenney: She is an American actress, who was born in Manhattan, New York, and is best known for her portrayal of Debra Gallagher on Shameless, hit TV series. She also starred in another hit family sitcom called Roseanne.

14).  Such short little lives our pets have to spend with us, and they spend most of it waiting for us to come home each day…….John Grogan

John Grogan: He is an American journalist and non-fiction writer and lives in rural eastern Pennsylvania in a farm home. His memoir Marley & Me was a best-selling book about his family’s dog called Marley. It was eventually made into a film of the same name in 2008 and starred the famous actor Owen Wilson and actress Jennifer Aniston.

Charles M. Schulz: He was an American cartoonist, who was born in Minneapolis, Minnesota. He was the creator of the famous comic strip Peanuts, featuring the characters Charlie Brown and Snoopy. Widely regarded as one of the most influential cartoonists of all time.

16).  A dog will teach you, unconditional love. If you can have that in your life, things won’t be too bad…….. Robert Wagner

Robert Wagner: He is an American actor on stage, screen, and television. He was born in Detroit and is best known for starring in the television shows It Takes a Thief, Switch, Hart to Hart, and NCIS.

17).   The world would be a nicer place if everyone had the ability to love as unconditionally as a dog……… M.K. Clinton

18).  Pets have more love and compassion in them than most humans……. Robert Wagner

19).  The only creatures that are evolved enough to convey pure love are dogs and infants………..………. Johnny Depp

Johnny Depp: He is an American actor, producer, and musician, who was born in Owensboro, Kentucky. He has been nominated for 10 Golden Globe Awards and three Academy Awards for Best Actor.

Gerald Durrell: He was a British naturalist, conservationist, and author, who was born in Jamshedpur, India. He founded the Jersey Zoo on the Channel Island of Jersey, and also the Durrell Wildlife Conservation Trust. His memoirs of his family’s time living in Greece were adapted into the television series called The Durrells.

21).  If I had a pound for every time my dog made me smile. I’d be a millionaire…… Steph Harris

22).  The most affectionate creature in the world is a wet dog……… Ambrose Bierce

Ambrose Bierce: He was an American short story writer, journalist, and poet who was born in Meigs County, Ohio. He was a versatile writer and prolific writer and regarded as one of the most influential journalists in the United States of his time.

Will Rogers: He was an American stage and motion picture actor, cowboy, and newspaper columnist, who was born a Cherokee citizen in Oologah, Oklahoma. He traveled around the world three times and made 71 films, of which 50 were silent films.

25).  A dog is the only thing that can mend a crack in your broken heart. ……..Judy Desmond

26).  Puppies are nature’s remedy for feeling unloved, plus numerous other ailments of life…..Richard Allan

Richard Allan: He is a British politician and life peer, who was born in Sheffield England. He was the Liberal Democrat Member of Parliament for Sheffield Hallam from the general election of Thursday 1 May 1997 until the dissolution of Parliament on 11 April 2005.

27).  Having a dog will bless you with many of the happiest days of your life, and one of the worst… Author Unknown